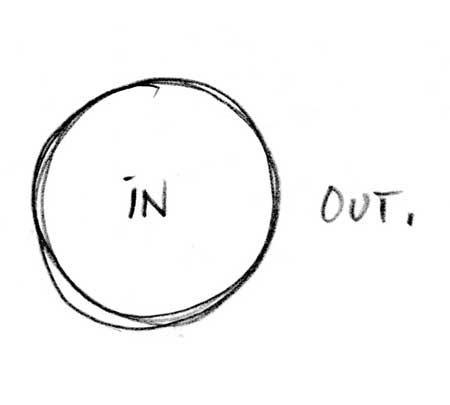 I ask this, because I have read a number of posts around the blogosphere over the last week or so that claim that so-and-so is no longer ‘evangelical’, or that someone should not call themselves ‘evangelical’ anymore.

Is the edge of what is considered acceptable evangelical behaviour being hardened – are the boundaries of the ‘evangelical’ set being fixed more firmly into position?

Whether you are ‘in’ or ‘out’ seems to be very important at the more ‘traditional’ end of the evangelical tent – I’ve recently read comment by Kevin Miller in Leadership Journal on Rob Bell, Brian Maclaren and Don Miller’s decision to ‘give up’ church (which has now been removed), and Brian Maclaren gracious response, Adrian Warnock’s pronouncement that Steve Chalke is “no longer an Evangelical by any realistic definition”, and now all the fuss over the World Vision decision to employ gay and lesbian Christians who are legally married – and then its decision to change its mind on the matter.

I can’t help but feel that lines are being drawn.

And not, it seems, lines drawn on the traditional theological areas of contention, such as the nature of the atonement, the centrality of the cross, methods of evangelism, the conversion experience and the ‘social gospel’, but on new issues that have become important within a wider post-modern cultural context, namely, the value of church structure and community, the role of women, LGBT rights and the ‘inerrancy’ of Scripture (what ever that actually means).

Benjamin L Corey on his Patheos blog yesterday made interesting comments and observations about the World Vision controversy, reflecting on what it means for the wider evangelical community:

“Although it may not have always felt this way, Evangelical Christianity was a relatively large bubble that had room for a range of perspectives. Fundamentalist Evangelicals, Mainstream Evangelicals, and Progressive/Emergent Evangelicals were able to all be in the same space – though there was usually friction in areas of overlap, for a time it was big enough for everyone.”

Over the last few years, evangelicalism has become more and more centre set rather than bounded set – with boundaries becoming more and more blurred around a main central point of agreement, namely the incarnation of God in Jesus Christ, His atoning sacrifice on the cross, and His bodily resurrection.

But this now seems to be changing, as Corey explains:

“Yesterday however, we saw a merger between mainstream evangelicals and fundamentalist evangelicals. Together, they were able to merger to the point that it fractured the [evangelical] circle, sending the rest of us [progressive and emergent evangelicals] outside of what used to be a diverse evangelical tribe.

[….] What we saw the death of yesterday obviously wasn’t the theological category of “evangelical” but the culture of “evangelicalism”, it was a death of the tribe as we knew it. The fundamentalist and the formerly ‘main stream’ evangelicals drew hard lines in the sand, merged together, and made it clear that they are not interested in big tents or leaving room for the “other”.”

“Basically, if evangelicalism had a Court of the Gentiles, the other two groups [fundamentalist and mainstream evangelicals] just set up a bunch of tables and told us [progressive and emergent evangelicals] to go wait outside.”

In other words, the fundamentalist and mainstream evangelical ‘elites’ have decided that they want to control who is allowed ‘in’, and who should be left ‘out’, of the evangelical tent, and they are using cultural issues, rather than traditional theological issues, to draw the line.

As Corey concludes his reflection on the pressure put on World Vision to withdraw its diversity policy with regard to employing married gay and lesbian Christians:

“As a result, Evangelicalism as we knew it, died. Instead of affirming the trinity and the inspiration of scripture in order to be called an evangelical and leaving all other theological debates open for charitable disagreement, the New Evangelicals have now added neutrality on same sex marriage something that must be disavowed before signing on. When leaders wished World Vision “farewell” and declared this “apostasy“, they made the lines dark and clear: you can’t be an evangelical if you don’t agree with them.

It was a requirement that didn’t need to be added and has at best, created a “New Evangelicalism” with very little room for diversity, let alone outsiders.

It’s clear they’ll now go in their own direction– without us. Not by our choice, but by theirs. Not because we left, but because they left.”

You can start to see what will happen in this ‘New Evangelicalism’.  Soon, progressives and emergents will not be welcome anymore – opinions will harden, the questioning of central dogma will no longer be allowed, those who disagree will be asked to leave, or asked to stop using the evangelical ‘brand’.

It also shows that these ‘New Evangelicals’ have missed the cultural move away from authoritarian and static structures to relational and fluid structures – they are mixing up holding to theological truth with maintaining a cultural expression – saying you can only be theologically true if you stick to our fixed cultural understanding – hold to our traditional position or you are can no longer identify yourself as evangelical.

I think this is a mistake – and once again shows that evangelicals are as influenced by the worldly culture as anyone else – it’s a power trip, a land grab, trying to put a wall around land that doesn’t belong to them.

Mainly because it belongs to Jesus.

It’s His church, not theirs, and they need to wake up to the fact that maybe, just maybe, He wants ‘in’ those that they want ‘out’.

2 thoughts on “In or Out? Who decides the boundaries of Evangelicalism?”