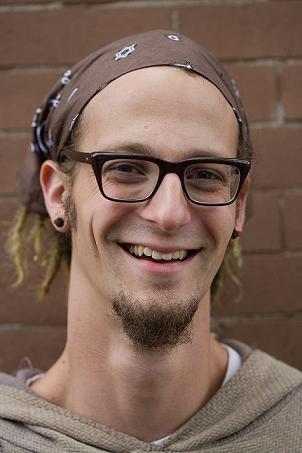 I notice that Shane Claiborne has been in London this week speaking at the Pentecost Festival 2010.

In case you don’t know who Claiborne is, then here is his bio from the Pentecost Festival website (here):

“….Shane Claiborne, (is) a prophetic Christian activist. Having spent 10-weeks working alongside Mother Teresa in Calcutta and three weeks in Baghdad during the war in Iraq with the Iraq Peace Team, he sees the Christian message from a fresh perspective. His best selling books (The Irresistible Revolution, Jesus for President, and Becoming the Answer to Our Prayers) paint a radical new vision for social action, peacemaking and community. His passion is found not only in his words but with The Simple Way, a faith community that he has helped pioneer in inner city Philadelphia. Shane’s take on Jesus’ instructions that are illustrated by his profound and often hysterical stories are causing a revolution… a revolution of ordinary radicals ready to change the world with little acts of love.”

I read The Irresistible Revolution a year or so ago and thought it was a profound book – and one that all of us should read!

With this in mind, I saw an article on the Christian Today website about the talk he gave last Friday, which really spoke to me:

Speaking to around 1,000 Christians last night, he (Claiborne) said it was time to rethink the church and what it meant to be followers of Christ in today’s world.

He encouraged Christians to be counter cultural and join in the suffering of the people living in their communities.

“The love [of the Bible] is not the love of storybooks and fairytales but it is the harsh love that keeps us up all night,” he said.

Claiborne pointed to the lesson of Jesus’ parable about the rich man and Lazarus – the rich man may have been rich during his life on earth but in the end he robbed himself of compassion and died lonely and separated from God.

He argued that building community among believers was the key to forming disciples, as he joked about the irony that the number one priority of megachurches today was to get members of their congregations into small groups.

He contended, however, that the unity God wanted did not necessarily come through doing the big things, like the tower of Babel built by human hands, but rather through the small things done by Christians living like salt and yeast in the world.

The sentences that really hit me were, “….He encouraged Christians to be counter cultural and join in the suffering of the people living in their communities”, and “….Building community amongst believers is the key to forming disciples”.

Without true community we can’t expect to develop true disciples.  The two go hand in hand.

By it’s very definition, a disciple is someone who learns from someone else through close contact – they learn to do what the teacher does by observation, conversation and emulation, becoming more like the teacher every day.

In the Christian life we are disciples of Jesus, learning from him through the Holy Spirit working in us and through others around us.  This by itself is unbelievely profound, but what makes it even more mind blowing is that it is all impossible without community.  Without a true and living connection with others, and a personal and corporate connection with God himself in Jesus, through the Holy Spirit, we can’t possibly hope to live a life as a disciple!

Are we forming disciples in our churches?  If not, then could it be that we aren’t building true community?

And what does true community involve – connecting with those who are suffering – not only with those in our immediate church family but also in love and compassion with others outside it in the world around us.

This is hard stuff, but it’s got me thinking!